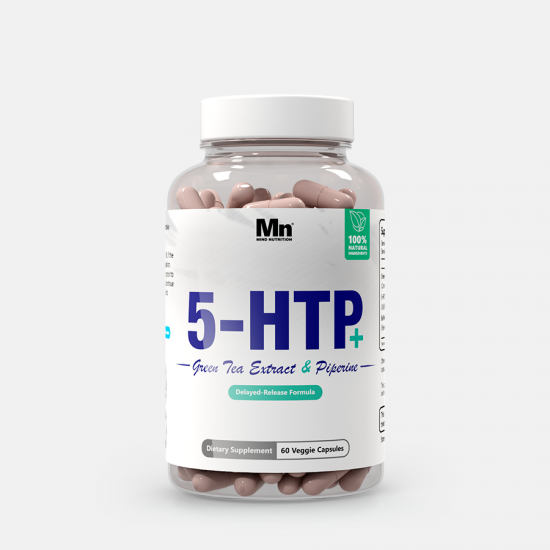 5-HTP is a naturally occurring amino acid and a precursor to serotonin. Serotonin is the key neurotransmitter for stabilizing mood and  happiness while also playing a crucial role in sleep and digestion.

5-HTP (5-Hydroxytryptophan) is extracted and isolated from griffonia simplicifolia seeds, which are the most abundant source of naturally occurring 5-HTP in the world.

5-HTP is an intermediary step between tryptophan and serotonin. Unlike Tryptophan, 5-HTP does not require a transport molecule to be converted to serotonin in the brain. This makes it more effective at crossing the blood-brain barrier, and therefore results in a more efficient conversion to serotonin when compared with tryptophan.

What is Green Tea Extract and EGCG?

EGCG is thought to support cellular and cardiovascular function, assist with weight loss, and protect the brain by reducing oxidative stress.

Piperine is one of the active compounds extracted from black pepper. Piperine has proven to be very effective at improving the bioavailability of many extracts, including EGCG and 5-HTP. We include a patented form of black pepper extract that contains over 95% Piperine.

Combining 5-HTP, EGCG and Piperine for Bioavailability, Efficacy, and Safety

5-HTP can be a great supplement in your nootropic arsenal if it is utilized correctly. However, there are some concerns associated with regular, long-term 5-HTP use if it is not supplemented correctly.

Unlike other products, our 5-HTP has been designed to overcome these concerns by incorporating some key mechanisms and ingredients into our 5-HTP formula which make it the most safe and effective 5-HTP supplement we have ever used.

What makes our 5-HTP supplement so unique?

Our combination of 5-HTP, Green Tea Extract and Piperine results in an effective and safe 5-HTP supplement that can be used daily.

Suggested Use: As a dietary supplement, take one capsule once per day.

Warning: Do not use if under the age of 18, or if the safety seal is broken. Do not combine with any medications. Always consult with a medical practitioner prior to use of this or any dietary supplement. Discontinue immediately if any adverse effects occur and contact your healthcare practitioner.