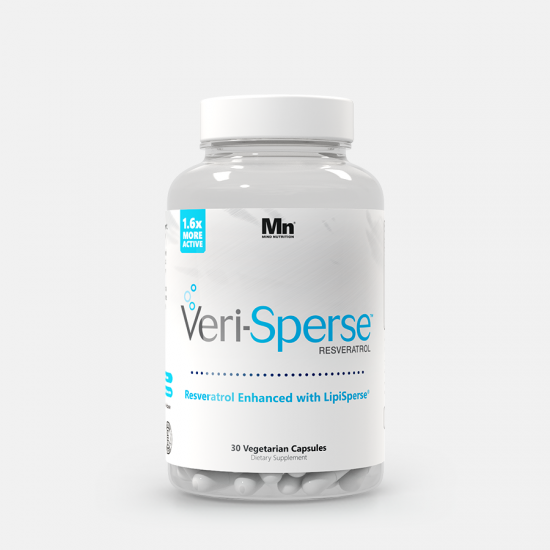 This product is currently out of stock

VeriSperse™ contains 90% of Veri-te™ resveratrol, which is produced using an innovative yeast fermentation process. This means VeriSperse™ resveratrol is free of pesticides, emodin & PAHs, and it is odorless with a neutral taste.

Unlike other technologies, LipiSperse® coats every particle ensuring they do not agglomerate in aqueous environments. Proper dispersion also accounts for the increased bioavailability.

Resveratrol is a natural phytoalexin. Recognized as strong antioxidant, research indicates that resveratrol is a powerful nootropic and modulates a number of signaling pathway effectors that may enable significant improvements in concentration, focus and reductions in memory loss [1].

Resveratrol absorption was measured from blood samples taken prior to the start and in the course of 24 hours post supplementation. Plasma trans-resveratrol and conjugates were measured as a change from the baseline for each participant at each time-point. At 24 hours, no metabolites were detected.

The calculated area under the curve (AUC0-24h) values were 6297 ng.h/mL for VeriSperse™ versus 3145 ng.h/mL for standard resveratrol. As shown by the strong increase in AUC 0-24h value:

Where to Buy VeriSperse™ Resveratrol Capsules?

VeriSperse™ Resveratrol capsules are available from Mind Nutrition in 30ct. containers. Shipping is free under £35 in the UK and we ship VeriSperse™ worldwide.

Warning: Do not use if pregnant or nursing, under the age of 18, or if safety seal is broken. Always consult with a medical practitioner prior to use of this or any dietary supplement. Discontinue immediately if any adverse effects occur and contact healthcare care practitioner. KEEP OUT OF REACH OF CHILDREN.