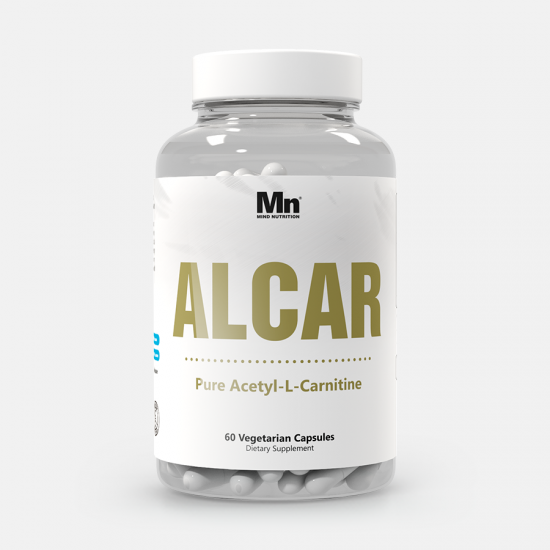 Carnitine is compound which is biosynthesized from the essential amino acids methionine and lysine. However, when it undergoes the process of acetylation, which involves adding an acetyl group to a molecule, it has a greatly improved ability to cross the blood-brain barrier. The improves the effectiveness of L-Carnitine per dose, allowing it to reach the brain more quickly, and this is what makes Acetyl-L-Carnitine a more effective product. This is the same as the relationship between choline and acetylcholine which, as you know, is an essential neurotransmitter in the brain.

The effects of Alcar supplementation have been widely researched in various areas including anti-aging, mental and sports performance, anxiety and mood improvement, weight loss and treatment of diseases such as Alzheimer's and Parkinson's.

In addition to this, Alcar is a great antioxidant as it has been shown to prevent spatial memory impairment in studies.¹ Spatial memory is the part of the memory that is responsible for recording the environment and one's spatial awareness to it. Spatial memory is required for finding one's way around a city or a familiar location, for example. These are often referred to as your 'cognitive map' and are represented in working, short, and long-term memory.

Furthermore, Alcar has been shown to improve mood, cognition and improve attention in a large number of studies. There are references to Alcar being effective for detoxification, possessing neuroprotective properties and stating that, "Acetyl-L-carnitine improves cognition in the brain, significantly reversed age-associated decline in mitochondrial membrane potential and improved ambulatory activity." ²

Another two studies found that ALC supplement or the Acetyl-L-Carnitine to be an effective cognitive and memory enhancer.³,⁴ There are also findings that Alcar is capable of offering neurotherapeutic benefits to its users as well as reducing the symptoms of male aging, namely improving mood and reducing fatigue.⁵,⁶ Many similar studies concluded with the same results.

Finally, carnitine is also vital for the transport of fatty acids during the process of creating metabolic energy. In other words, it facilitates the process of breaking down fat stores for energy, and so it can be helpful during exercise and dieting.

Suggested Use: As a dietary supplement, take 1 capsule (500mg) 1 - 3 times per day. Ideally, use in conjunction with an active nootropic compound.

Warning: Do not use if pregnant or breast feeding, elderly, under the age of 18 or if safety seal is broken. Always consult with a medical practitioner prior to use of this or any dietary supplement. Discontinue immediately if any adverse effects occur and contact your health care practitioner. KEEP OUT OF REACH OF CHILDREN.

Mind Nutrition proudly sources and only the purest standardized ingredients in our products. Our products are free from preservatives, yeast, gluten, starch lactose. No added salt or sugar. .