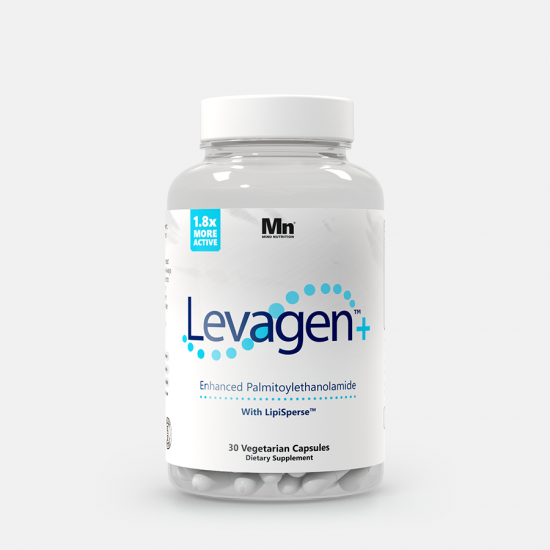 What is Levagen®+ Palmitoylethanolamide (PEA)?

Levagen®+ is a cold water dispersible palmitoylethanolamide (PEA) which is specifically designed to increase bioavailability and get to work fast.

In aqueous environments (such as the stomach), the specifically designed Levagen particles freely disperse. This net effect translates to increased bioavailability. With over 90% loading, Levagen®+ supplies the largest amount of PEA in a water dispersible formulation. Particle sizes are quality checked by Dynamic Light Scattering (DLS) analysis as well as Laser Light Obscuration.

PEA acts at a number of receptors known to exert anxiolytic, anti-analgesic and anti-inflammatory actions, making it ideally suited to enhancing sleep and targeting pain and inflammation.

Levagen®+ is proven to be up to 1.8x more bioavailable than standard PEA based on a parallel, double-blind, bioavailability study done to measure uptake of PEA over a 24-hour period.

The objective of the trial was to determine whether LipiSperse® can be successfully used to improve the bioavailability of Levagen®.

The study was conducted with 28 healthy male and female volunteers over 18 years old. Participants were randomised into 2 groups (Levagen+ or Standard PEA) with each group consuming a single 300mg dose of a PEA formulation. (Blood samples were taken at baseline and 30, 45, 60, 70, 90, 120, 180, 240 minutes post ingestion.)

The primary outcome measure of the trial was the change in plasma uptake of PEA over a 4 hour period. The Levagen+ formulation significantly increased plasma PEA concentration above baseline concentrations by ~1.8x that of the standard PEA formulation.

Similar to Cannabidiol (CBD), Levagen®+ works via the same receptors and channels and it offers identical anti-inflammatory, analgesic and neuro-protective benefits.

However, unlike CBD, Levagen®+ is self-affirmed GRAS (generally recognized as safe), making it not only a safer alternative to CBD and nonsteroidal anti-inflammatory drugs, but a completely legal one too.

The following table outlines the similarities and advantages of Levagen®+ when compared with CBD.

Levagen®+ capsules are available from Mind Nutrition in 30 capsule containers. We recommend a standard dose of 1 capsule (300mg) once or twice per day.

It is highly likely you’ve come across Cannabidiol (CBD) products advertised online and in the market place… Granted, CBD does indeed exert many health benefits. However, not many people are...

Suggested Use: As a dietary supplement, take 1 capsule once or twice per day.

Warning: DO NOT use if pregnant, breastfeeding or under the age of 18. Consult with a medical practitioner before taking this nutritional supplement, if you have or suspect a medical condition or are taking any medications or dietary supplements. If you experience any adverse reactions from taking this product, discontinue use immediately and contact a healthcare practitioner. Do not use if safety seal is broken or missing. Store in a cool dry place.
KEEP OUT OF REACH OF CHILDREN.

Mind Nutrition proudly sources and utilizes only the purest standardized ingredients in our products. Our products are free from preservatives, yeast, gluten, and starch. No added salt or sugar. GMO-Free.