Product successfully added to your shopping cart
Quantity
Total
There are 0 items in your cart. There is 1 item in your cart.
Total products (tax incl.)
Total shipping (tax incl.) To be determined
Tax £0.00
Total (tax incl.)
Continue shopping Proceed to checkout
Sign in & Register

It is highly likely you’ve come across Cannabidiol (CBD) products advertised online and in the market place… Granted, CBD does indeed exert many health benefits. However, not many people are familiar with a compound known as palmitoylethanolamide (PEA), which is produced naturally in the body to combat pain and inflammation.¹ Many animals and plants produce this chemical. The highest amounts can be found in soy lecithin, soybeans, egg yolk, peanuts, and alfalfa.²

As a supplement, PEA is available in tablet, capsule, and powder form. In European countries, PEA is marketed as a food for special medical purposes. Since its discovery in the 1950s, researchers have been fascinated with PEA. As a strong and safe natural painkiller and anti-inflammatory, PEA offers hope for a lot of people suffering from chronic and neuropathic pain. More than 30 clinical trials so far have confirmed it can relieve complex pain.³

However, not all PEA supplements are equal, as with many other supplements. Levagen®+ uses LipiSperse®, the same technology found in HydroCurc, to increase functionality and bioavailability of PEA in the body.

Levagen®+ is a clinically studied, superior form of palmitoylethanolamide (PEA) that supports joint health and a healthy inflammatory response. Much like CBD, Levagen utilizes the endocannabinoid system, potentiating its actions at CB1, CB2, and GPR55 receptors, and TRPV1 channels for supporting joint function.?

In this article, an analysis of the main benefits of PEA supplementation will be explored. Furthermore, the key mechanism of actions will be evaluated. In addition, an explanation as to what makes Levagen®+ unique to other PEA supplements on the market will be highlighted. Lastly, we will conclude with researched dosages, the timing of dose and additional supplements and foods to support its effects.

Key Benefits of PEA In The Body

Palmitoylethanolamide (PEA) is a food component known since 1957. PEA is synthesized and metabolized in animal cells via a number of enzymes and exerts a multitude of physiological functions related to metabolic homeostasis. Research on PEA has been conducted for more than 50 years, and over 350 papers are referenced in PubMed describing the physiological properties of this endogenous modulator and its pharmacological and therapeutical profile (5). PEA was already identified in the 50s of the last century as a therapeutic substance with potent anti-inflammatory properties. Since 1970, the anti-inflammatory and other immune-modulating properties of PEA have been shown in a number of placebo-controlled double-blind clinical trials on influenza and the common cold. Positive results coincided with the clinical use of PEA in former Czechoslovakia under the brand name Impulsin.?

PEA is an interesting anti-inflammatory therapeutic substance and might also hold great promise for the treatment of a number of (auto)immune disorders, including inflammatory bowel disease and inflammatory diseases of the CNS.?

In individuals, PEA helps reduce pain intensity, since (PEA) has been reported to down-modulate mast cell activation and to control glial cell behaviours.? Patients who take PEA supplements may have reduced pain intensity when compared to those who don’t take the supplement. Patients who struggled with back pain tended to notice significant relief when using this compound.? Studies have shown that PEA helps improve pelvic pain. In one study conducted on women, taking PEA in a period of 6 months helped improve not only pain but also sexual function symptoms, thereby improving the overall quality of life.?
PEA also displays promising effects when given to patients with stroke. In the recovery outcomes of the patients having a stroke, PEA was able to improve brain status and cognitive skills when compared to those patients who did not receive the supplement.?

In addition, PEA can improve social behaviour and cognitive skills in autistic children.¹? In studies on mice, PEA showed that it can reduce heart tissue injury and cell death. It also indicated that it can lower the level of inflammatory cytokines. In a 5-week treatment of rats using PEA, it showed that this substance can lower blood pressure when compared to rats that did not get treatment using the substance.¹¹

PEA also exerts benefits for eye and gut function. In patients with eye disease, treatment using PEA conferred anti-inflammatory benefits. It can be used in patients with diabetic nerve damage and glaucoma as a treatment supplement.¹² In fact, Palmitoylethanolamide is regarded as a natural retinoprotectant.¹²

As a member of the endocannabinoid family, PEA may have psychological modulating properties including regulation of depression, stress, and anxiety. The treatment with PEA significantly decreased levels of anxiety in this study. Interestingly, recent research demonstrated that antidepressants like imipramine and escitalopram can increase PEA levels in the brain. Furthermore, the results of a small short-term study showed that PEA (dose of 1.2 g/day) used as adjunctive therapy to citalopram effectively improved symptoms of patients with major depressive disorder.¹?

But it doesn’t end there… What about improving exercise recovery?! 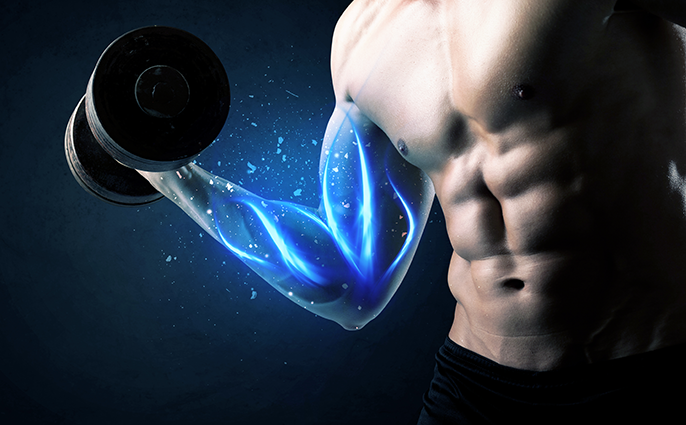 Participants who consumed Levagen®+ may be subject to higher exercise intensities for longer time post an initial training session, allowing for an improved training response or sports performance. Athletes (who exercise within quick succession) and who attend multiple sports matches may have improved performance when consuming Levagen®+ compared to those who do not. A lower blood lactate concentration is correlated with increased aerobic energy metabolism and decreased anaerobic energy metabolism.

Sparing of anaerobic energy substrates by consuming Levagen®+ may allow participants to exercise at higher intensities for longer.

There are not many compounds quite like PEA. This is because PEA has the potential to exert an “Entourage effect”. Put simply, it means that a single compound exerts an influence over many biological pathways, to achieve a similar end result/outcome. For example, reducing pain. PEA Indirectly increases anandamide (AEA) by down-regulating FAAH. A recent study showed that, rather than directly inhibiting AEA hydrolysis by substrate competition, PEA affects the degradation of AEA by down-regulating the expression of FAAH.¹³ To date, the current evidence suggests that the therapeutic effects of PEA on both the central and peripheral nervous system occur through synergistic interactions amongst several mechanisms.¹? Levagen®+ works as an endogenous (body produced) cannabinoid with analgesic and anti-inflammatory action o CB1, CB2, TRPV1 receptors. It can decrease inflammation locally through various mechanisms of action on: 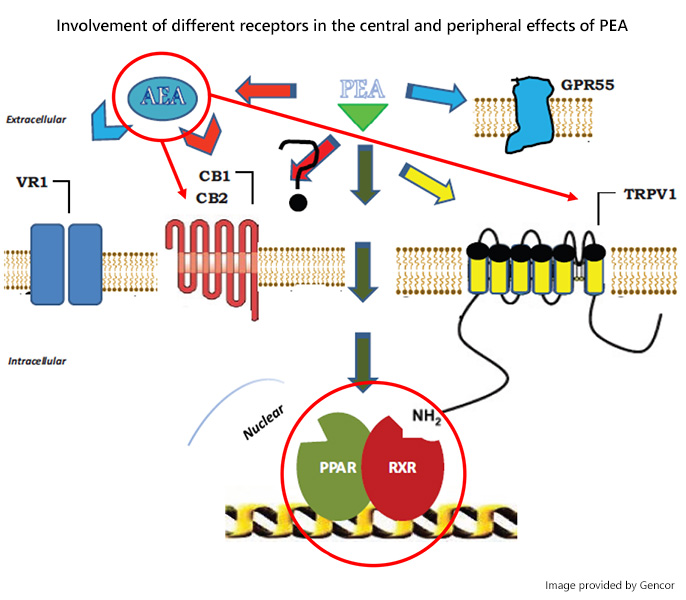 What Makes Levagen®+ Unique To Other PEA Supplements 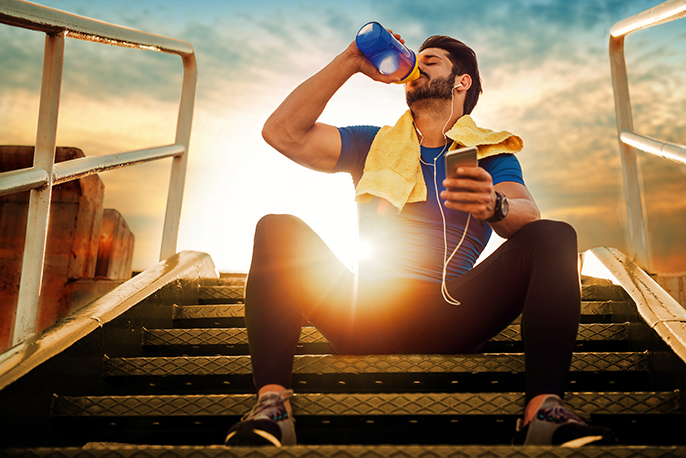 Levagen®+ is efficacious and safe. It is backed by human clinical studies with interesting anti-inflammatory and analgesic properties. Its unique mechanism of action for reducing pain / induce relaxation (similar to CBD) sets it apart from other PEA supplements on the market. It is an exceptional alternative to NSAIDS and cannabidiol.

Clinically, there are no adverse effects reported with this exact type of PEA preparation. But most importantly, in a parallel, double-blind, bioavailability study researchers aimed to determine whether the use of a Lipid-Based Drug Delivery System, LipiSperse®, can be successfully used to improve the bioavailability of palmitoylethanolamide. Standard PEA supplements are insoluble in a watery GI tract.

To evaluate the uniqueness and advantage of this technology, a study involved 28 healthy male and female volunteers over 18 years old.

The outcome measures were:
Change in the uptake of PEA over a 4 hour period.
The safety profile was also assessed.

Levagen®+  can have the same efficacy, if not better, at lower dosages compared to standard PEA. Better value for money for the consumer. Its unique delivery system (LipiSperse® technology) ensures high bioavailability and functionality, requiring lower dosages / High loading.
Furthermore, Levagen®+ is banned-substance tested (NSF/LGC) and it is made in Australia.

However, unlike CBD, Levagen®+ is self-affirmed GRAS (generally recognized as safe), making it not only a safer alternative to CBD and nonsteroidal anti-inflammatory drugs, but a completely legal one too!

How Best To Use Levagen®+ And Combining With Other Supplements/Foods

So you may be wondering what the most effective dosage is for your needs. Well, it appears that dosages of 300mg up to twice per day will yield broad-spectrum benefits. Given that many users feel a calming effect, it is possibly advantageous to consume Levagen®+ in the evening, preferably around bed-time. In fact, there are literally studies underway to explore the impact that Levagen®+ has on sleep quality in HEALTHY adults! Super exciting. Try it out yourself… beat the study!

Finally, it’s important to add other ways to enhance endocannabinoid signaling and production. Pick up your blueberries, because they contain a constituent known as Pterostilbene, which is also an inhibitor of FAAH - further increasing the bliss chemical in our brains.¹? Furthermore, a stack consisting of MACA, Blueberries, Levagen®+ and Curcumin would be an anti-inflammatory, mood-boosting powerhouse! 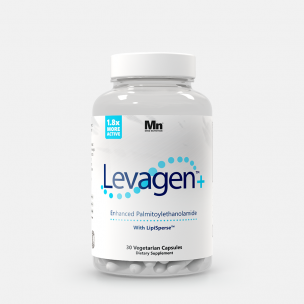 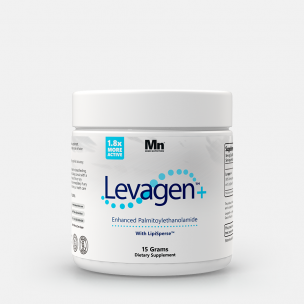