Successfully added to your basket
Quantity
Total
There are 0 items in your cart. There is 1 item in your cart.
Total products (tax incl.)
Total shipping (tax incl.) To be determined
Tax £0.00
Total (tax incl.)
Continue shopping View Cart & Checkout
Sign in & Register

> Blog >Why Nootropics are Critical for the Modern Lifestyle

Why Nootropics are Critical for the Modern Lifestyle

The unrelenting quest for a positive mood, greater tolerance to stress and deep connecting relationships with others in our environment has never been so highly demanded in human history. But why are we all chasing something better? Is it because we are getting functionally worse over time? What’s contributing to this epidemic of sub-optimal performance?

Well, there are many factors that play a role here, but of course as you probably guessed, stress is definitely one such factor. The source and impact of these stressors vary from person to person. If we placed two different people into the exact same environment, eliciting the same behaviours, lifestyle habits, relationships, there is likely to be a major difference in the way each person perceives and responds to these stressors. The fact is, no stressors are created equal.

So what can we do to help us ‘handle’ the stressors of the modern lifestyle? Well, nootropics can certainly assist us, particularly when accompanied with excellent dietary habits, physical activity, sleep and an enriching environment. In this article, an exploration of how nootropics prevent neurodegeneration will be examined. In addition, various anti-stress nootropics will be highlighted and explained. Finally, a discussion regarding the way in which nootropics can help us unlock greater energy levels and recovery will be explored.

Neurodegeneration is a commonly used word whose meaning is believed to be universally understood. However, establishing a precise definition for neurodegeneration is much more arduous than one might imagine. Often, neurodegeneration is only casually mentioned and scarcely discussed in major medical textbooks and is even incompletely defined in the most comprehensive dictionaries. Etymologically, the word is composed of the prefix “neuro-,” which designates nerve cells (i.e., neurons), and “degeneration,” which refers to, in the case of tissues or organs, a process of losing structure or function. Thus, in the strict sense of the word, neurodegeneration corresponds to any pathological condition primarily affecting neurons (5).

Mitochondrial dysfunction is becoming one of the most emerging pathological process in the aetiology of neurological disorders. Other common etiologies of neurological disorders are aging and oxidative stress. Neurodegenerative disorders, for instance, Huntington's disease, Parkinson's disease, Amyotrophic lateral sclerosis, Epilepsy, Schizophrenia, Multiple sclerosis, Neuropathic pain and Alzheimer's disease involves mitochondrial dysfunction and is regarded as the core of their pathological processes (2).
Another key cause of accelerated neurodegeneration is related to sports-related head trauma. In the past decade, several small studies and anecdotal reports have suggested that sports in which athletes are exposed to repeated head trauma might be associated with long-term risks of neurodegenerative disease (6).

Patients with TBI frequently exhibit neurodegeneration. The symptoms of these neurodegenerative processes include behavioural disturbances, cognitive dysfunction, and/or motor-related symptoms (7).

Other major causes of neurodegeneration can be seen in the image below. 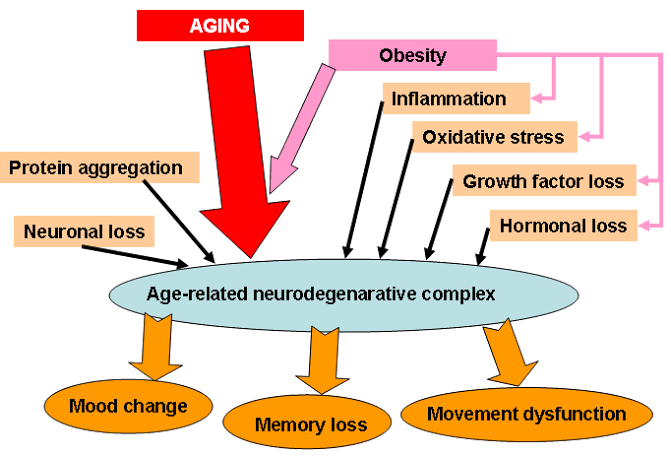 Another extremely modern hypothesis as a leading cause of neurodegeneration is elevated endotoxin. Endotoxin is a lipopolysaccharide (LPS), constituting much of the outer membrane of gram-negative bacteria, present at high concentrations in gut, gums and skin and in other tissue during bacterial infection. Blood plasma levels of endotoxin are normally low, but are elevated during infections, gut inflammation, gum disease and neurodegenerative disease (9). Adding endotoxin at such levels to blood of healthy humans induces systemic inflammation and brain microglial activation. Adding high levels of endotoxin to the blood or body of rodents induces microglial activation, priming and/or tolerance, memory deficits and loss of brain synapses and neurons (9). These nootropics have actually been well researched to defend against endotoxin in the body: Curcumin (10), Huperzine-A (11) and Panax Ginseng (12).

Curcumin: Recently, there is growing attention regarding the usage of curcumin to prevent or delay the onset of neurodegenerative diseases.

Neuroinflammation plays a key role in the onset and progression of neurodegenerative diseases. In line with this idea, curcumin reduces the expression of IL-1?, IL-6 and TNF-? in LPS-stimulated BV2 microglia in a dose-dependent manner. It is known that amyloid aggregates can be cleared via phagocytosis by brain macrophages and that patients with AD show signs of defective phagocytosis that results in an ineffective clearance of A? plaques. Interestingly, curcumin can stimulate microglial phagocytosis and clearance of A? in vitro as well as increase the induction of heat-shock proteins in response to the addition of soluble A? aggregates to neuronal cultures (4).

Saffron: Alzheimer’s disease (AD) is the most common form of dementia, in which the death of brain cells causes memory loss and cognitive decline and neurodegeneration. Several factors are thought to play roles in the development and course of AD. Existing medical therapies only modestly alleviate and delay cognitive symptoms. Current research has been focused on developing antibodies to remove the aggregates of amyloid-? (A?) and tau protein. This approach has achieved removal of A?; however, no cognitive improvement in AD patients has been reported. The biological properties of saffron, the dry stigma of the plant Crocus sativus and particularly its main constituent crocin, have been studied extensively for many conditions including dementia and traumatic brain injury. Crocin is a unique antioxidant because it is a water-soluble carotenoid. Crocin has shown potential to improve learning and memory as well as protect brain cells. A search of the studies on saffron and crocin that have been published in recent years for their impact on AD as well as crocin’s effects on A? and tau protein has been conducted (3).

Citicoline: Neuroprotective activity of citicoline has been repeatedly shown in preclinical models of brain ischaemia and trauma. It appears to be beneficial in some slowly advancing neurodegenerative disorders such as glaucoma and mild vascular cognitive impairment. Citicoline is neuroprotective in various animal (preclinical) experimental paradigms. The compound has offered marked neuroprotection in several in vitro and in vivo models of acute and chronic brain ischaemic and neurodegenerative diseases, including brain hypoxia, ischaemia and intracerebral haemorrhage, brain and spinal cord trauma, in vitro glutamate excitotoxicity, and in vivo amyloid toxicity (13).

One attractive feature of a good nootropic is its ability to support cognition during times of stress. The human body responds to stressful events by increasing the production of the hormone cortisol. This is synthesized and secreted into the systemic circulation from the adrenal glands following stimulation by the anterior pituitary hormone adrenocorticotropic hormone (ACTH). The release of ACTH itself is increased in response to the secretion of corticotropin-releasing hormone (CRH) and arginine vasopressin (AVP) from neurons in the hypothalamic paraventricular nucleus (PVN). Together, the hypothalamus, pituitary, and adrenal glands constitute the so-called hypothalamic-pituitary-adrenal (HPA) axis, which plays an essential role in the adaptive response to psychogenic (e.g., fear) and physical (e.g., cellular lesion or pathogen invasion) stressors (8).

There is now ample experimental evidence where elevated GC levels and prolonged exposure to stressful conditions induce structural remodelling of neurons with synaptic loss as well as alterations in glial functions, which are frequently maladaptive. The current knowledge about cellular targets and mechanisms through which stress triggers changes in the brain suggest that it can lead towards the development and progression of neurodegenerative pathologies such as Alzheimer's (AD) and Parkinson (PD) disease (8). 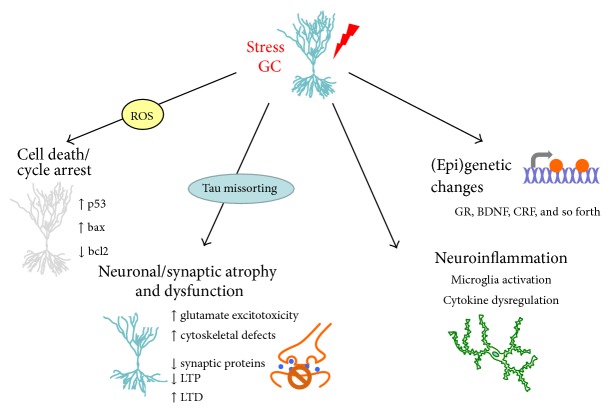 With this in ‘mind’, let’s take a look at the research on anti-stress nootropics.

Various nootropics that reduce the damaging effects of stress on cognition include Ashwagandha, Red Reishi and Rhodiola Rosea.

But also remember that Ashwagandha is able to support GABA, dopamine and serotonin production, whilst also leading to increased Nerve Growth Factor production (15).

Red Reishi is better known in western countries by the Japanese term “Reishi”; it is defined in Traditional Chinese Medicine (TCM) as the “mushroom of immortality. It is known to regulate the HPA axis and displays neuroprotective effects against oxidative stress-induced neuronal apoptosis (16).

Next up is Rhodiola Rosea.

The stress-protective effects of Rhodiola Rosea extracts have been shown to be engaged with the hypothalamic-pituitary-adrenal (HPA) axis and several key mediators of stress responses, such as heat shock proteins (HSP), stress-activated c-JUN N-terminal protein kinase 1(JNK1), Forkhead box O (FOXO) transcription factor DAF-1, cortisol, nitric oxide, and beta-endorphins. It also reported that Rhodiola Rosea extracts reduced the serum levels of corticotropin-releasing hormone and corticosterone via down-regulating the expression of c-FOS in the hypothalamus of rats subjected to stress (17).

How Nootropics Upgrade Our Energy And Recovery

Many nootropics are known to facilitate greater production of energising neurotransmitters such as dopamine, norepinephrine and adrenaline. These chemicals are known to enhance our alertness, vigour and attention towards achieving a goal. But, many nootropics go far beyond this. There are many examples of nootropics that can support ATP synthesis in the body, by virtue of supporting mitochondrial function - the powerhouse of our cells. One such example, is Cordyceps. Recent literature further confirms that Cordyceps enhances cellular energy in the form of ATP (adenosine tri-phosphate).

This can directly support recovery from physical stressors such intense exercise. Mitochondrial biogenesis is increased by Cordyceps, which may have a subsequent influence on fatty acid oxidation and glycogen turnover, increasing ATP availability and improving performance. Cordyceps has also been shown to act as an antioxidant, potentially reducing exercise-induced oxidative stress. Upregulation of energy-producing pathways enhanced blood flow, and increased intracellular ATP may also increase the ability to reach and maintain exercise at higher intensities. Cordyceps use has previously been shown to delay lactate accumulation (18).

Another excellent example is Uridine Monophosphate. This nootropic is highly respected for its ability to support NGF production and to strengthen dopaminergic tone in the body (19). Furthermore, results obtained from a study showed that uridine has a potent protective effect against hypoxic damage not only in the myocardial tissue, as it was found previously, but also in the lung tissue. The mechanism of action of uridine can be associated with the activation of ATP-dependent potassium transport in mitochondria (20).

Featuring once again is Panax Ginseng. Both Asian and American ginseng both contain ginsenosides, which are the active compounds believed to act on the central nervous system and to have antioxidant and anti-inflammatory properties,8 as well as cortisol-modulating effects. These are some of the reasons why researchers have considered Panax Ginseng to be a potential treatment for fatigue in multiple populations with chronic illness, including cancer survivors, patients with fibromyalgia, and patients with multiple sclerosis (21). 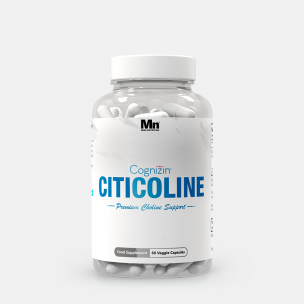 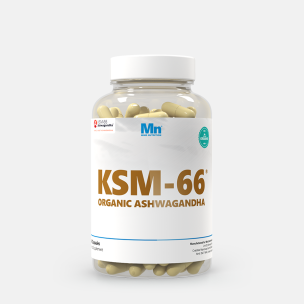 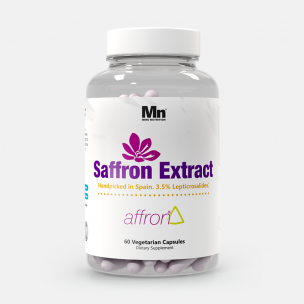