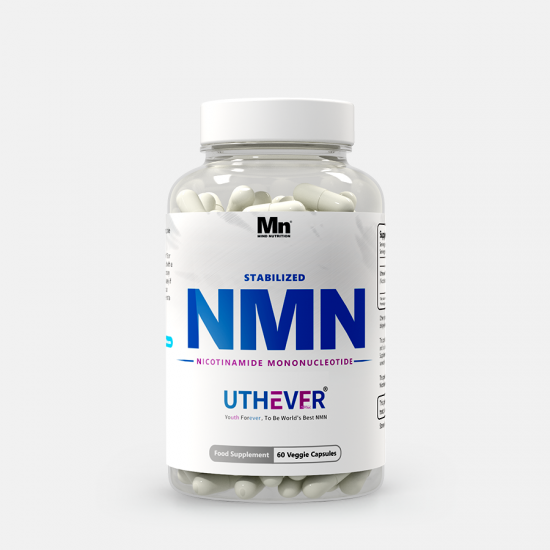 What is Nicotinamide Mononucleotide?

A nucleotide is the basic building block of nucleic acids. Nicotinamide mononucleotide (NMN) is a nucleotide derived from ribose (a simple sugar) and nicotinamide (a water-soluble form of vitamin B3).

NMN is a naturally occurring precursor of nicotinamide adenine dinucleotide (NAD+). NMN is absorbed in the small intestines, where it is converted to NAD+ through the Slc12a8 NMN transporter.¹ Due to this, it is important to have a timed or delayed-release capsule in order to optimize uptake of NMN.

NMN's chemical structure makes it a difficult compound to work with. Regular NMN needs to be stored at very low temperatures in order to preserve the structure of the compound before it is manufactured into tablets. This instability is a result of the structure rapidly degrading when exposed to moisture and normal atmospheric conditions (room temperature). This results in a reduction in the purity of NMN.

By analyzing the structure of the molecule, it was discovered that the isoelectric point of the inner salt structure is a key factor of NMN's instability. In order to improve the stability of NMN, the researchers at Effepharm developed a form of NMN with a more compact and orderly microscopic arrangement that effectively protects the inner structure from direct contact with the air.

Uthever® NMN is far less hygroscopic and temperature-sensitive than regular NMN, which means it does not suffer from the same stability issues as other forms.

Good brain function depends on sufficient cerebral blood flow to clean harmful waste products and allow the brain to have a sufficient supply of oxygen and nutrients.

The brain utilizes as much as 20% of your oxygen and energy during periods of rest, and these requirements increase as neuronal activity ramps up. This means the brain needs to adjust incoming oxygen and glucose levels via CBF quickly.

Responding to different levels of demand of the brain relies on a mechanism called neurovascular coupling (NVC). We can regard NVC as the relationship between local neural activities and the subsequent changes in CBF.

NAD+ plays an important part in mitochondrial function in all of our cells, which can also restore neurovascular coupling. When we get older, the levels of NAD+ begin to fall, which results in a decline of cellular function and less efficient DNA repair. NMN helps to restore some of the lost NAD+.

Some research suggests NMN is able to reverse several aspects of aging in some organs, including the eyes, skeletal muscle, and arteries. Other studies suggest NMN could reverse age-related mitochondrial dysfunction. That means NMN may ameliorate mitochondrial function, improve NVC response and keep the brain in good condition.

In one study, researchers tested NMN in elder mice to determined whether it could ameliorate cognitive function by improving blood flow in the brain.

Mice were given NMN injections for a two-week period. During the period of treatment, the mice were given a series of cognitive and motor coordination tests, which are both linked to NVC responses in the brain. The researchers found that NMN treatment was able to ameliorate the NVC response of aged mice, and the increased level of CBF improved cognitive and walking ability in the mice. The researchers concluded that the age-related fall of NAD+ levels facilitates dysfunction of the brain, leading to cognitive decline.²

Uthever® NMN also has some key unique benefits over other forms of NMN:

Mind Nutrition offers Uthever® Nicotinamide Mononucleotide (NMN) in 125mg delayed-release capsules. Shipped from the UK to most of the world, buy Uthever® NMN capsules from Mind Nutrition with confidence.

Warning: Do not use if under the age of 18, or if the safety seal is broken. Always consult with a medical practitioner prior to use of this or any dietary supplement. Discontinue immediately if any adverse effects occur and contact your healthcare practitioner. KEEP OUT OF REACH OF CHILDREN.